With the rise in the price of gas and the vast majority of common household goods, many federal employees wonder what this means for their pay moving forward.  Whether it is due to inflation, labor shortages, or a possible global recession, everyone is asking a fair question – what does this mean to my take home pay?

The reality is that federal employees and federal retirees are treated quite differently when it comes to pay adjustments to offset the rising cost of goods.

In this article, I’ll explain the differences between federal employee pay raises and retiree cost-of-living adjustments (COLAs) – and why you should never confuse the two!

Federal employees may receive a wide variety of different types of pay, depending on their jobs and the work that they do. To establish a baseline, let’s focus on two types of pay that the vast majority of employees receive.

Regular pay and locality pay get added together and are displayed on the pay tables for each of the geographic areas.

While an employee is working for the federal government, they’re hoping for pay raises over time – and the higher, the better! There are a few ways that these increases can occur:

With respect to federal employee pay raises – Who gets them? How are they determined? And when are they applied?

Pay Raises: Who gets them?

As far as pay raises are concerned, they’re only applied to federal employees who are still working, not to retirees. The annual pay raise typically occurs at the beginning of a year, but of course, it’s possible that one could occur at any other time during the year.

With pay raises, these could be very political. Depending on which party controls the White House and Congress, pay raises can be an incredibly controversial topic.  Of course, that is not what I’m going to discuss in this article.  No politics here – just math!

Pay Raises: How are they determined?

I’m going to focus on are the financial aspects of this pay raise phenomenon. My point to mentioning that this can be a political topic is that I want you to realize that pay raises are not set in stone. It’s not guaranteed that if the economy is doing well, then federal workers get a raise. That is not the way pay raises go. It is very possible that employees experience inflation in a given year, so things around them might get more expensive, but they have no pay raise authorized for that year.  This lack of predictability for pay raises leaves many uneasy.

Pay Raises: When are they applied?

To give you a little bit of an idea, I’m sure that many of you, in the not so distant past, were in a position where you didn’t receive a pay raise for three years – some groups even longer than that. So in 2011, 2012 and 2013, there were no annual pay raises for federal workers. Again, everything is getting more expensive, but their pay is just not keeping up with how expensive those things are.

Normally, these pay raises are determined at the end of a given year (again, very political), and they’re applied the following January in the very first pay period of the year.  Everyone loves getting pay raises, but they’re not guaranteed, nor are they set in a standard way based on economic conditions.

But retirees are a different story…

Cost of Living Adjustments in Retirement

Retirees are going to operate under a completely different set of rules as far as how their check changes each year. To be clear, retirees are not affected by the annual pay raise that I just described. Those annual pay raises are only for employees.

For retirees, they receive a CSRS or FERS pension, and that pension will change over time based on specific economic conditions.  This increase is called a Cost of Living Adjustment (or COLA). There’s a formula to get this number, so it takes any political nature out of the equation. The President does not sign COLAs into effect and Congress doesn’t approve them.  COLAs just happen. Again, those COLAs are only for retirees.  This is quite different than what they have experienced while they had been working all those years.

COLAs: How often is it measured and by whom?

Each year, the Bureau of Labor Statistics releases a number called the Consumer Price Index for Urban Wage Earners and Clerical Workers (or “CPI-W” for short).  In reality, the CPI-W is measured on an ongoing basis throughout the year – but for purposes of adjusting pensions and Social Security benefits, it uses the CPI-W for the 3rd quarter of a year as its yardstick and compares it to the 3rd quarter of the previous year to determine how things have changed.

COLAs: What does it really measure?

The Bureau of Labor Statistics has set a “basket of consumer goods”, whether it’s gas, other forms of transportation, food, etc. — all of these different goods that the average consumer purchases. They basically watch the cost of these goods over time and that determines how much the economy has changed. The CPI-W, this number that the Bureau of Labor Statistics releases, is expressed as a percentage. It’s that percentage that is used to determine the change in a federal retiree’s pension check.

COLAs: When does it get applied?

When you begin receiving COLAs is largely determined by what kind of category you fall in:

COLAs are officially set in November each year (effective in December and payable in January). The first year COLA is determined by the # of months in the prior year (November – October) a person was retired.  For instance, if you retired 10/31, you would receive 1/12th of the published COLA percentage the following January.

COLAs: Do CSRS and FERS retirees get the same COLA?

It stands to reason that since we have two different retirement systems (CSRS and FERS), that they may be affected by COLAs in different ways.

Over the last 10 years, CSRS retirees have averaged an increase of about 1.88% each year. For FERS, that number is 1.70%, so FERS are a little bit further behind than the average CSRS employee. 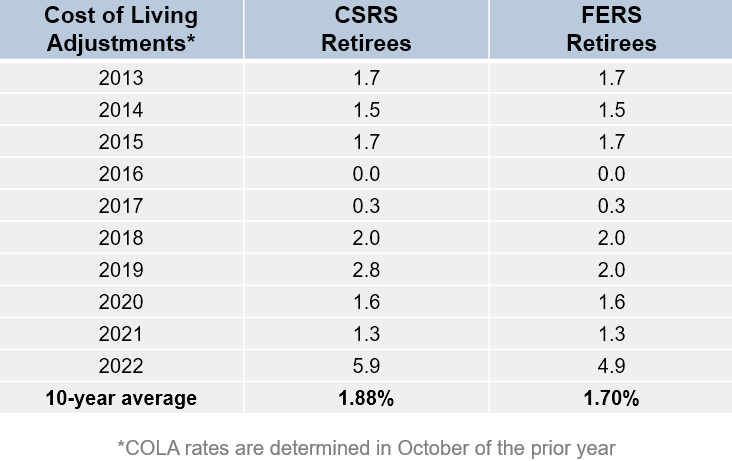 While someone is still working, there are some years where they won’t receive an annual pay raise – the same thing is possible for retirees. I wish I could say that retirees will always receive an increase to their pay, but the reality is, some years there are no changes.

For instance, in 2016 there was a 1.0% pay raise for those still working, but there were no increases to a CSRS or FERS retirement check.

A big point that I want to make to federal employees is that oftentimes employee pay raises and retirees’ COLAs don’t coincide with one another. Retirees might get a big increase to their pay in their retirement check, but employees don’t get anything that year, and vice versa.

This is a trick question!  Locality pay is reserved only for employees. Remember, that was the geographic pay based on where someone lived and how much extra money they got in their normal paycheck to account for the higher expense of living there. That locality pay adjustment only happens for employees (not retirees). However, when employees are preparing to retire, one of the figures that will be calculated is called the “high-3” average salary.  This figure will be used in the calculation of the initial/starting CSRS or FERS pension.

But once I’m retired, if I later decide to leave Chicago and move to an area that’s much less expensive (perhaps even to an area that doesn’t have any locality pay for those people who are still employed), then my retirement check doesn’t go down. Unfortunately, the same can be said if the opposite happens. If I earn my highest three years of earnings in a location that does not have locality pay (and that is what my pension is based on), but then I later move to an expensive area as a retiree, my retirement check does not go up.

I can, in good faith, say that locality pay is not applied in retirement, but what I really want to drive home is that it can be included in the initial calculation of the pension – but that’s it. Where you decide to live in retirement will not really impact the retirement check you receive, and that can either be good or bad.

Hopefully, this article has helped you to understand the great distinction between retiree COLAs and employee pay raises so you can make informed decisions regarding your retirement.  If the “water-cooler talk” at your office has some bad information floating around about pay raises and COLAs, send this article to them to set the record straight once and for all!

Check out the workshop schedule to attend a FedImpact workshop in your area!  Use the SF-182 to request paid time off to attend the training.  Don’t see a workshop in your city/state?  Add your name to the list to be notified when new locations and dates are announced!

Chris Kowalik is a federal retirement expert and frequent speaker to federal employee groups nationwide. In her highly-acclaimed Federal Retirement Impact Workshops, she and her team empowers employees to make confident decisions as they plan for the days when they no longer have to work.

Chris’ candid and straightforward nature allows employees to get the answers they need, and to understand the impact these decisions have on their retirement.  After all, if what you thought was true wasn’t, when would you like to know?